Your WI Sports Team Authority featuring a chef inspired menu in a friendly, casual sports bar atmosphere. Lunch and dinner are served seven days a week and breakfast is served Saturdays and Sundays. Download our mobile app to view our menu, place your online order, make a reservation and to check out our awesome events! Earn FREE rewards with every visit.

Our Full menu is available for dine in and curbside carryout daily! Click about us to find our hours of operation. Place your curbside order online or by call in to 414.427.3838.

Check out our ever changing beer menu below.

Looking to make a reservation? Click the button below 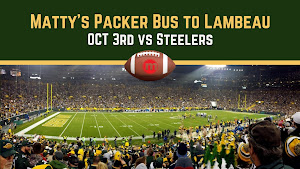 Join us for a ride up to Lambeau for the Packer vs Steelers game at 3:25pm on Oct 3rd! $75 TICKET INCLUDES: A safe and comfortable ride to Lambeau in a luxury Coach bus with wifi, storage and restrooms. Bus tickets include a free Bloody Mary before loading, lunch to go for the ride and a snack and n/a beverage on the return. You'll enjoy raffles, Packer pools, giveaways, a GREAT playlist and a good time on the ride. Bar opens at 9am. Bus loading begins at 10:30am Bus departs Matty's promptly at 11am This bus WILL sell out so get your tickets now! Tickets can also be purchased in person at Matty's! *This experience does not include a game ticket - you must have your own ticket to the game. 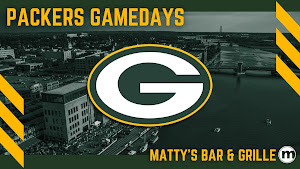 Your place to watch EVERY Packer game for the 2021-22 season! We've got plenty of space & seating both inside and outside, a bunch of TV's for easy viewing, great food and drink specials, raffles, giveaways and a whole lot more fun in store for you! Join our Green and Gold Club on the Matty's mobile app to stay up to date and follow this event to find out what's happening each week! 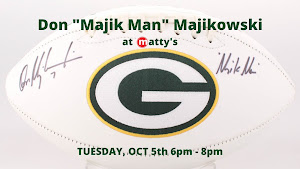 Don "The Majik Man" Majikowski is coming to Matty's! Get your autographed photo for $20 and join us as The Majik Man calls out our Tuesday Dolla Draw winner! Majkowski was selected by the Green Bay Packers in the tenth round of the 1987 NFL Draft. He was originally issued jersey #5, but switched to #7 the following season in anticipation that #5 would be retired for Paul Hornung. The jersey was never officially retired. As a rookie in 1987, he split time with Randy Wright, with whom he also shared quarterback duties in 1988. During the 1987 season Majkowski's salary was $65,000; he also received a $10,000 roster bonus. Nicknamed The Majik Man, Majkowski broke out during the 1989 season. He was given the starting job and Randy Wright was released. Majkowski had one of the finest seasons in Packers history, with 353 completed passes in 599 attempts. He also threw for 27 touchdowns, and his 4,318 passing yards led the NFL. Notably, the Packers won their first game against the hated rival Chicago Bears since 1984. The key was a touchdown play, first nullified by an illegal forward pass by Majkowski, then upheld by instant replay as a legal pass. The season ended with 10 wins and 6 losses; Majkowski capped the season with being selected to the Pro Bowl. Majkowski signed a new one-year contract for over $1.5 million in September 1990, but his success was cut short in the tenth game of the season. He was injured when he was upended and tackled on his shoulder by Freddie Joe Nunn of the Phoenix Cardinals, who drew a personal foul on the play. At first thought to be a bruise, Majkowski's injury turned out to be more serious, a torn rotator cuff. The Packers finished the season with backups Anthony Dilweg and Blair Kiel. During the 1991 season, Majkowski was benched by head coach Lindy Infante and replaced by Mike Tomczak as starter, but resumed starting duties at the beginning of 1992. On a play on September 20 against the Cincinnati Bengals, Majkowski tore a ligament in his ankle in the first quarter. He was replaced by 22-year-old Brett Favre, who completed the game, a one-point victory, and went on to start every Packers game through 2007. 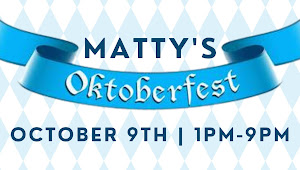 Prost! We're throwing an Oktoberfest party in our Big Backyard that you won't want to miss! Join us for food, beer and LIVE music by Chaz Duo 2-6pm & Jake Warne from 8pm until 12am. Bust out your Lederhosen and Drindls and we'll bring the BIER and EATS!